Kyudo - The Way of the Bow

Kyudo is the practice of Japanese archery. It is deceptively simple, but underneath lie layers of profound complexity that take a lifetime to come to understand.

Disillusioned with the direction of much of kyudo practice in Japan - with its emphasis on hitting the target, rank and prizes - Kanjuro Shibata XX found a kindred spirit in Tibetan meditation master Chogyam Trungpa Rinpoche, who first invited him to the West. Together they shared the vision of kyudo practice as a form of meditation and training in the principles of enlightened warriorship.

It is that view that is followed today, with kyudo taught without any ranking system or any particular emphasis on hitting the target. Using only traditional equipment, students begin by learning the Shichido, the seven basic movements involved in releasing the arrow.

Shibata Kanjuro XX passed away in 2013. The role of Onyumishi and leadership of Zenko International is now carried on by his son-in-law, Kanjuro Shibata XXI. 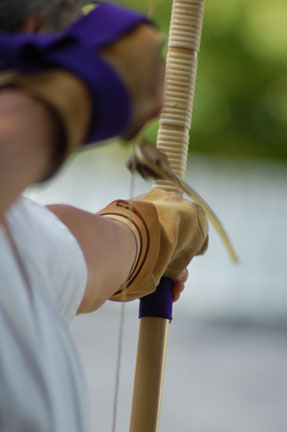 “All the hopes of ego - wanting a good car, a good husband or wife, money, a nice house - in kyudo, we learn to cut this, so that our deep hearts are completely clear. But it is a continual process. If you use kyudo merely to build your ego, you will not have real perseverance. You will likely be a three-day monk and quickly give up. Most important: never forget your beginner’s heart.”